Hemingford Abbots is well served by public footpaths and bridleways offering a combination of interesting and pleasant rural and riverside walks. There are both short and more demanding longer walks to be enjoyed. Walking is mainly over fairly level ground either over tarmac paths or agricultural or meadow land. The more demanding walks involve circular routes which make use of footpaths and bridleways of neighbouring parishes linking Hemingford Abbots with St Ives, Godmanchester, Houghton, Hemingford Grey and Hilton.

Click here to see the map showing our own village paths and some of the linking paths to neighbouring places of interest.

Footpath 1 (1001 m) and Footpath 6 (143 m): FP1 leads off New Road, cutting across the corner of an arable field, along the field hedgerow and then taking a southerly direction towards the A1307 (formerly the A14). Instead of turning south, it is advisable to continue in an easterly direction to join FP6 to the end of The Thorpe in Hemingford Grey and from here it is possible to link up with paths in Hemingford Grey (as shown on the map) to achieve circular walks. 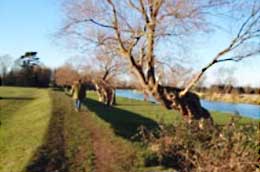 Footpath 2 (572 m): Turn off the High Street by Beechers House and, after a short walk behind the houses of Chapmans, cross two riverside fields where there are often cattle grazing. This is a very attractive walk with views across the river and the meadows to Houghton Hill. The path joins the towpath walk in Hemingford Grey which passes the C12th Manor House.

Footpath 3 (143 m): At Forge Corner, the boundary of Hemingford Abbots and Hemingford Grey, turn towards the river for a short walk across the field to link with FP2. FP3 combined with FP2 makes possible a circular walk from the village.

Footpath 4 (1430 m): At the westerly end of Common Lane, FP4 links the village to the Cambridge Road (now the A1307, formerly A14). This is a rural walk over arable and pasture land where there are grazing animals. There is no linking footpath so it is necessary to retrace one’s steps. 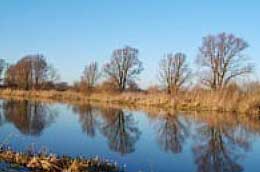 Bridleway 5 (429 m): From Meadow Lane, BR5 links Hemingford Abbots with Houghton. This is a very attractive walk, along a tarmac path, across a large area of water meadows, at first crossing the backwater of the River Great Ouse over the Bailey Bridge. The path links with a further path which crosses the main course of the river at Houghton Lock and the National Trust Water Mill, into the old village centre of Houghton. From here the walker can take a circular route along “The Thicket” to St Ives and return to Hemingford Abbots via a path next to the Dolphin Hotel. [Please note that the water meadows on both sides of the river are prone to flooding].  BR5 is accessible to wheelchair users, but there are two gates where maneuverability is limited. 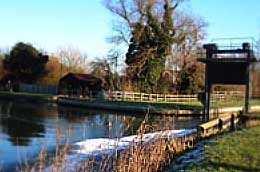 Footpath 7 (715 m): This riverside footpath joins the end of BR5 near Houghton, turing westwards along the river near Houghton and is part of “The Ouse Valley Way”. It is another attractive walk through the water meadows and can be used also as a circular walk to Godmanchester.

Footpath 8 (429 m): Turning eastwards from BR5 near Houghton, this path follows the river through the water meadows, terminating where it meets the old railway line. There is no linking path so it is necessary to retrace one’s steps. 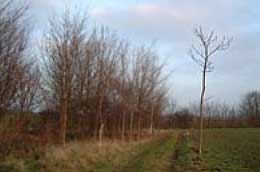 Bridleway 9 (858 m) and Bridleway 10 (2145 m): These paths are more remote from the village since they are located on the southerly side of the A1307 (formerly A14). Access to them is gained via FP1 and FP6, and then taking the Hemingford Grey footpath to Gore Tree Road and on towards the A1307 where there is a footbridge to Mere Way. Both paths are located at the end of Mere Way, and are delightful rural walks in open countryside giving good views southwards. BR9 leads to Hilton and can be used as a circular walk. BR10 meets the main road from Papworth to Godmanchester, from where it is possible to carry on towards the Offords or retrace one’s steps.

To all users of the footpaths and bridleways: Please respect the countryside. Don’t drop litter. Close gates. Keep dogs under proper controls.