Hemingford Abbots has the remains of its village cross: a base stone, carved from Barnack stone. It measures 22 inches square with a depth of 12 inches. The stone has a simple line of carving around it, and is of pleasing yet modest appearance. The date of the base stone is unknown; certainly, it is mediaeval, but whether it is 14thC or 13thC, or earlier, is a matter for conjecture because no written records of it have been found. Hemingford Abbots was part of the estates of Ramsey Abbey, having been given by Ailwyn in 974. The Village Cross would have been broken up during the time of the Reformation and the dissolution of Ramsey Abbey in 1539. 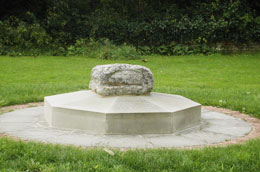 Where was the original site of the village Cross? Again that is a matter for speculation because the only verifiable records of its existence and position begin in the early 20th Century:-

The Royal Commission on Historical Monuments
Hemingford Abbots. Base of Cross on east side of cross-roads; 240 yards south-south-east of the Church, has the stump of the Cross still in the socket. The base is shaped like an inverted mortar but is said to be a solid block. Condition good.

The Victoria History of the Counties of England
Hemingford Abbots. On the east side of the cross-roads, about 250 yards south-east of the Church is the base of a wayside Cross, with part of the stem.

Old photographs of the village show the Cross base stone near the front door of ‘Beechers’ in the High Street. Older villagers remember it being used there as a mounting block for horses and bicycles. The directions and distances quoted in the above references roughly agree with this site near the junction of the High Street, Royal Oak Lane and Manor Lane.

In the autumn of 1967 the base stone was moved and a furious village argument ensued which resulted in the resignation of the Chairman of the Parish Council. The Parish Council Minutes chronicle the events along with the more colourful recollections from villagers.

It appears that Rev Bawtree, the Rector, was concerned that the coming change of ownership of ‘Beechers’ might endanger the preservation of the stone and thought that the stone could be best looked after by the Church. Discussions began with the then owners of ‘Beechers’ (Mr & Mrs Wilderspin) and Mr Blackburn, Chairman of the Parish Council. Suddenly Mr Blackburn decided to move the stone himself and enlisted helpers. It has been said that the removal was planned over a pint or two in The Axe and Compass but this cannot be verified. The stone was heaved into a wheelbarrow, trundled along the High Street into Church Lane and deposited behind the Churchyard wall.

Strong complaints were made to the Rector (who was also the Vice-Chairman of the Parish Council) and to the Parish Council. At the next Parish Council meeting on 10th October 1967 the Chairman reported his actions explaining that he had moved it to the Churchyard for safe custody until such arrangements can be made with the County Council for its erection on its original site. Although the other members of the Parish Council felt that the stone had been removed without their approval, they supported their Chairman for the time being and it was decided to leave the stone in the Churchyard. The Council sought advice from Mr Arnold-Baker of the National Association of Local Councils who suggested that the stone belonged to the Ecclesiastical Parish. From reading correspondence within the village records it can be deduced that matters then became angry and personal and on February 22nd 1968 a Special Meeting of the Parish Council was called solely for the purpose of receiving the resignation of Mr EJG Blackburn. Mr Blackburn was not present, but a letter from him was read out in which he stated that in view of the way things have developed over the Village Cross he could no longer continue as Chairman or a Member of the Parish Council.

Further enquiries about the ownership of the stone were made of the County Archivist and the County Council, and they advised the Parish Council that it was its responsibility. Agreement was then reached between all parties that all further matters about the stone should be handled by the Parish Council.  In May 1968 the County Archivist, Mr Dickinson, was taken to see the stone in the Churchyard. He also attended the July Parish Council meeting and gave a talk about Village Crosses. The Council asked him to design a plain Village Cross so that the stone could be restored. He sent more information to the Parish Council in September, but it appears that by then the project was losing impetus and enthusiasm. The Council agreed to discuss the matter at a later date. Mr & Mrs Wilderspin moved from ‘Beechers’. The stone stayed in the Churchyard.

Mrs Keane who lived opposite the Churchyard at the Manor House, worried that the stone might become lost or forgotten. A few years later, she persuaded some telephone engineers to use the crane on the back of their lorry to lift the stone out of the Churchyard onto the corner of her front lawn. It remained there for about thirty years.

In 1973 the village were planning celebrations to mark the Millennium of Hemingford Abbots in 1974. (In 974 A.D. Ailwyn gave 30 hides of land at Hemingford Abbots to Ramsey Abbey). The Parish Council under the Chairmanship of Mrs Keane was leading the organisation and at a meeting on January 5th 1973, Mr Grove reported that he had located what he considered to be a large part of the former Village Cross … sited in the river bank in his garden. He showed a sketch of three stones and their approximate dimensions. There were no further developments about the Village Cross that year – probably due to the busy preparations for the Millennium events. Mr Grove’s sketch was stored in the Parish Council files, to be unseen until 2001.

But the base stone of the Village Cross was not forgotten. In 1999, the Parish Council proposed that the Village Cross could be restored to celebrate the Millennium of 2000. This would involve designing and building a new cross or shaft to be inserted into the base stone. The project was announced to the village and a competition held for the design. There were many entries from the Primary school after the children had learnt about village crosses and their history. Helen Tuff of Class 7 was the winner and Mr Trevor Roberts, a village architect who specialises in Church architecture, undertook to design a Cross from her drawing. His designs were presented to the village for comment: after several amendments, a design for a decorated and lettered stone plinth was finally agreed. The choice of site for the monument was not straightforward; the original site was unknown, yet villagers felt that it should historically and properly be in a central position in the village. In March 2001, after consultations with the Highways, Planning and Conservation departments, the Parish Council, residents, utility companies and village organisations, a site in Church Lane on land belonging to the Manor House was agreed, by kind permission of Mrs Keane and family. All that remained to be done was to find the monies for the erection of the monument, the cheapest of the three stonemasons’ quotations being over £9000. National Lottery funds were suggested, but proved unforthcoming.

At about this time, the Parish Council heard a story that the original shaft of the Cross perhaps still existed. In an area where there is no natural stone it would be logical to suppose that when the Village Cross had been broken at the time of the Reformation, the stone would have become a valuable salvage commodity and been reused as was, on a far larger scale, the stone of Ramsey Abbey. The village story recounted that stones were brought from ‘College Cottage’, now known as ‘Whiteways’, to ‘Riverview’ to shore up the river bank.

Mr Grove’s 1974 drawings in the Parish Council records were found by chance – Mr Grove had been a resident of ‘Riverview’. In January 2002 the story was explained to Mr Wolf, the new owner of ‘Riverview’. Spirits dropped when he described how he had employed a JCB to restructure the river bank in his garden. But he was curious about the story and promised to explore the water when the winter levels dropped.  In May 2002 he reported that he could see, in the shallows, a stone which appeared to have similar dimensions to one of those in the 1974 drawing. In July a work party assembled, and with considerable effort and ingenuity three large, heavy stones were raised from the river bed. Sadly, it was evident they were not part of the Village Cross.

The Deputy County Archaeologist, Mr Quintin Carroll, examined them and described them as hand-cut of Barnack stone, about 200 years old, with insets for an iron post and thus they were probably marker posts for a boundary. He conjectured that they may have come from the nearby Manor House front garden.

There were no new ideas about the whereabouts of the remaining parts of the Hemingford Abbots Village Cross; the search was most likely exhausted.

Energies were then directed towards the building of the plinth and the securing of the original base stone (before anyone else decided to move it again). Mr Roy Trundle, the Clerk to the Parish Council, died tragically in April 2001. He was a local architect and a lover of local history; donations in his memory were given towards the ‘The Village Cross fund’. In 2004 the Parish Council asked for a revised design for a simple plinth for the base stone, and decided to provide funds for the project finally to be achieved.  A new site had become available when Royal Oak Lane had been made ‘one-way’ in the Traffic Calming Scheme. The newly created verge made an ideal position for the Cross; it was close to the old site at ‘Beechers’, it was on public land and it was in a central village location. Trevor Roberts produced one last design and the stonemasons, Hibbitts of Cambridge, executed the work. The cost was over £3000.

A ceremony was held to mark the completion of the work; many people were thanked and everyone agreed that the Village Cross should now stay where it is. After the Church, it is the oldest piece of heritage in the village.