Please view the latest Parish Magazine (PDF), which has details of services coming up and a message from the Vicar.

Please do contact our priest-in-charge if you would like to talk, or for prayer on 01480 39478 or via email vicar@churchbytheriver.org.uk. Our associate priests Judith Bolton and Brian Atling would also be glad to speak with you.

If you would like a regular email with church news for both St Margaret’s and St James’ and including links to join online services please sign up on the St James’ website: https://churchbytheriver.org.uk/wp3/ and scroll down to the Signup on the left side.

In the 10th century Ailwin, Earl of East Anglia, gave Hemingford Abbots and part of Hemingford Grey to Ramsey Abbey. King Edgar granted a charter for the first church to be built, on the site of the present chancel, in 974.

Two hundred years later this wooden church was replaced with a stone building, around 1190. Two columns and part of the former tower from this survive at the east end of the nave. The font, which is still used for Baptisms, originated in the early 13th century.

Much of the present church originates from the late 1300s, with the spire and wall painting being added in the 1400s.

The roof of the church was raised to its present height and the 22 carved angels were installed in the early 1500s. Five of the Six bells are dated 1754.

The Enclosure Award of 1806 consolidated church lands in the parish. The frontage of the Old Rectory dates from 1814, and several major repairs to the church were carried out in the 1820s.

Following significant restoration of the church porch and aisles in 1872-5, most of the present chancel dates from 1913. The main structure of the rest of the church has remained the same for over 500 years.

The church has four stained glass windows, but particularly noteworthy are those with engraved glass, which were created by local engraver David Peace.

The Church of St Margaret of Antioch can be located by turning into Church Lane off the High Street by the public house the Axe and Compass. The church tower can be seen from the village centre. 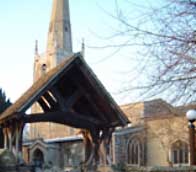 The Churchyard is approached from Church Lane via the Lych Gate which was given to Hemingford Abbots by Warboys Church and other friends in 1974 – the year when this church celebrated its millennium. Originally the Lych Gate was found in a derelict state in Tick Farm, Warboys and was believed to have been the entrance to a Chapel of Ease.

Leaflet : A free guide to the church is available at the door. A booklet about the Monuments in the Churchyard is available by the door for reference.

For enquiries about the publications, please email Charles Beresford.

St Margaret’s Churchwardens are responsible for the content on this page.